Mary Elizabeth Braddon was born in Soho, London on 4th October, 1835 – though she frequently in her older years stated she was born in 1837 to appear younger than she really was. Braddon was the third child born to mother, Fanny (White) Braddon and solicitor Henry Braddon (Junior); her sister, Maggie, was older by eleven years and her brother, Edward, by six. When Braddon was four Fanny left Henry because of his infidelities. This separation was unconventional for the period and Fanny brought up Braddon alone, striving to maintain respectability as a single mother in Victorian England.

Braddon attended several schools, one at Scarsdale and then a boarding school in Dartmouth Lodge where she was given a good education, but it was her godfather’s gift of a writing desk at aged six that sparked her interest and talent to become an author. She wrote several stories as a child, each of which were based on traditional fairy stories and had a sensational outcome, prefiguring her later, more well-known novels. 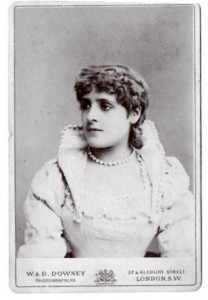 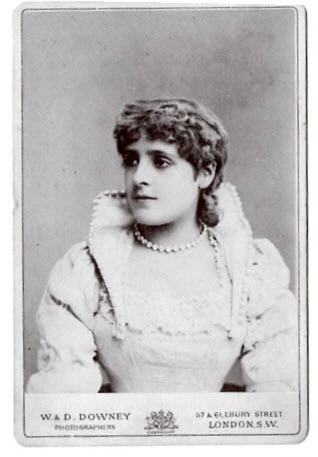 At seventeen Braddon moved to Bath where she started acting. As her son, W. B. Maxwell notes, she chose this career to be self-supporting hoping to earn enough money to support her mother due to her father’s lack of family commitment. Braddon’s acting career lasted for around eight years, beginning in 1852, but this choice caused controversy within her family and she was forced to take a stage name to maintain respectability – Mary Seyton. She toured the provinces, starting in Southampton and travelling to Winchester and Reading, as well as going to Scotland for a short period in 1855.

As her career developed she went from playing extras in crowd scenes, to having small speaking parts, eventually rising to major supporting roles and finally becoming a leading lady. Braddon worked hard, had a talent for acting, enjoyed her career and so was able to support her family through this profession. The majority of plays Braddon acted in were comedies and farces, but she also performed in burlesques, pantomimes and Shakespearean productions, including comedies, histories and tragedies.

In 1856, once she had achieved leading lady status in the provinces, Braddon moved to the Surrey Theatre to launch her career in London. This move was intended to consolidate her position as a credible actress and allow her to take on more demanding, prestigious, and thus more profitable, roles. However, she received varied reviews which slighted her début, meaning her first season in London was a failure and she returned to the provincial circuit. On her return from London she joined the company of Messrs. Wolfenden and Melbourne in Hull’s Queen’s Theatre, who, for six nights, performed in the Beverley Assembly Rooms, and then in 1857 she moved to Brighton, joining Henry Nye Chart’s company. Here she seems to have begun playing parts that were mostly too old for her, which suggests her waning popularity and her inability to sustain her acting career, confirming the short ‘life-span’ that actresses were all too aware of; her suitability for playing leading ladies was over and so she left to pursue her writing career.

During her theatrical career Braddon met John Gilby and Edward Bulwer Lytton, whom she describes as ‘the throne of power’. Both men became her literary mentors, advising her on what exhibitions to see, sending her books to read and proof reading her work. Gilby also paid her to write her first poetry collection Garibaldi and Other Poems (1861). Before this commission though, starting in 1857, Braddon had published several poems, under her stage pseudonym, in the Beverley Recorder and General Advertiser and the Brighton Herald. She had also been simultaneously commissioned to write Three Times Dead (1860) by the printer C. R. Empson. Three Times Dead was later reissued as The Trail of the Serpent and it can be found under this name today. Braddon’s first novel was not a financial success, but it gave her practical knowledge of the publishing industry and serialisation for future reference as she moved to London to establish herself.

Lady Audley’s Secret and the rise of Sensation Fiction

In London she began her writing career in earnest by assuming yet another pseudonym, this time the gender-ambiguous pen name M. E. Braddon. It is here in the 1860s that Braddon achieved lasting fame with her sensation novel Lady Audley’s Secret. Having begun its serialisation in John Maxwell’s Robin Goodfellow, Braddon abandoned it when the journal went bankrupt and began her next novel, Aurora Floyd. The public, however, had other plans, and urged her to continue the narrative, which she did in another of Maxwell’s journals, The Sixpenny Magazine. This novel cemented her reputation as a scandalous author who probed the darker side of the upper classes, leading one critic to argue that Braddon had ‘temporarily succeeded in making the literature of the Kitchen the favourite reading of the Drawing-room’. From this point on, Braddon wrote two novels a year and was able to buy a large family home in Annsley Bank. 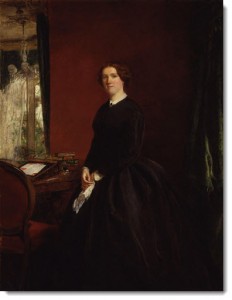 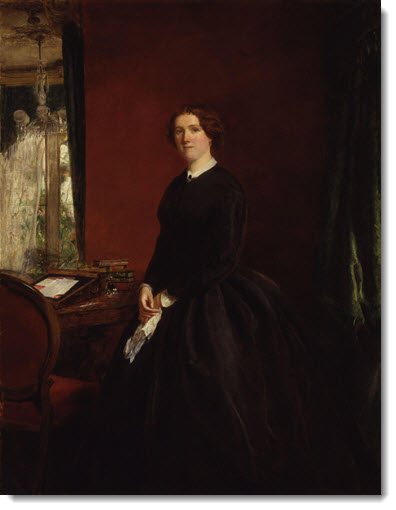 After meeting Maxwell in April 1860, she moved in with him in 1861, becoming step-mother to his five children. Maxwell’s wife, Mary Ann Crowley, is frequently described as residing in an Irish mental asylum, but she was actually living with her family. Braddon had six children with Maxwell – Gerald, Fanny, Francis (who died aged three), William Babington, Winifred Rosalie (Rosie) and Edward Henry Harrington (Ted) and they lived as common law husband and wife. In 1864, controversy arose, though: to conceal their unorthodox union Maxwell told the newspapers that he had married Braddon. These notices were intended to subdue public gossip in the interests of propriety; however, Richard Brinsley Knowles wrote to these papers, informing them that his sister-in-law and true wife of Maxwell was still living, thereby exposing Braddon’s ‘wife’ status as a façade.

On 5th September 1874 Maxwell’s wife died, reviving the public revelation that their union was unsanctioned by law. Maxwell sent Mr. Crowley, Mary Ann’s brother, three messages urging him to keep the funeral quiet. Knowles published in most of the London newspapers an announcement of the death of Mary Ann, and Maxwell, countering these messages, circulated a private memorandum to friends and family discrediting the news. When Knowles discovered Maxwell’s ruse, he revealed the whole story and the domestic staff gave notice and left. On 2nd October 1874, as soon as they legally could, Braddon and Maxwell married at St. Bride’s Church, Fleet Street. Afterwards, they moved to Chelsea, letting the gossip subside, returning to Litchfield a year later. During this period the Maxwells continually hosted dinner parties and saw friends; their social standing had not been irreversibly damaged. 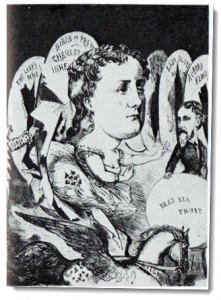 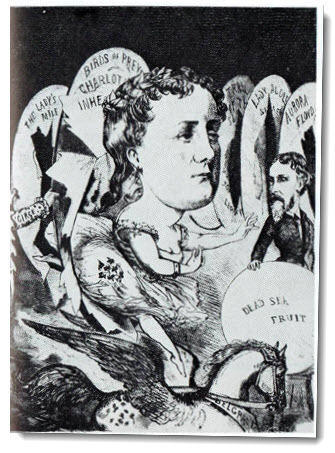 Building on her writing success, Braddon began editing her own magazines – Belgravia and the Belgravia Annual – giving herself more security as an author. Belgravia was a monthly magazine which cost one shilling and was aimed at a genteel readership. Braddon’s house style meant Belgravia was not short of material, as she notes in 1872: ‘the fact is we have fiction enough accepted & paid for to last the Mag: two or three years’. Thus, Belgravia was relatively successful: from 1866 to 1876, it maintained an average circulation of 15,000, peaking at 18,000 in 1868. After Maxwell sold Belgravia and the Annual in 1878, Braddon began editing The Mistletoe Bough, a Christmas fiction annual, in the same year. By producing a specifically Christmas annual Braddon again tapped into an already established yet expanding market, indicating her strong sense for business. The Mistletoe Bough focused on fiction, not essays or articles, and this format drew critical admiration from The Examiner: ‘[t]hat the public taste strongly inclines to compressed fiction and concentrated emotion, in the form of short stories, this excellent Christmas ornament is a proof’, ending with a ‘hearty approval of “The Mistletoe Bough”’. However, her editing duties did not deter Braddon from her own writing. She continued to publish voraciously, and although none of her later work matched the popularity of Lady Audley’s Secret and Aurora Floyd, her novels, plays and short stories remained in the public eye until her death. Braddon’s novels were frequently adapted for the stage – sometimes without her permission—and over the next 100 years Lady Audley’s Secret would be adapted for screen four times, most recently in the 2000 TV film. 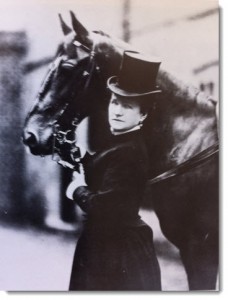 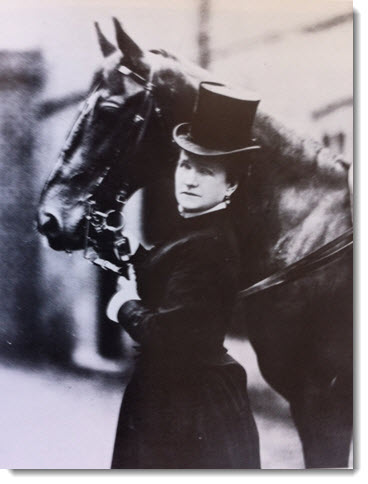 In Braddon’s late writing career there was a distinct move from publishing in periodicals to newspapers: Maxwell engaged Bolton’s William Tillotson for the syndicate, while he continued publishing her fiction in volume form. This meant her fiction was published across the country, not just in the capital, and so her work reached a wider audience.

Despite her many illnesses, Braddon consistently moved with the times: around 1912-3 she bought a car; in 1913 she attended the cinematic release of Aurora Floyd and in 1914, when World War 1 broke out, she helped hospital patients, continuing the charitable work that she maintained throughout her life. On 4th February 1915 Braddon died following ‘the gradual breaking of a number of minor blood-vessels in the brain’. At the end of the nineteenth century, E. A. B. in The Academy wrote that: ‘Miss Braddon is a part of England; she has woven herself into it; without her it would be different. This is no mere fanciful conceit. She is in the encyclopaedias; she ought to be in the dictionaries’.

One Reply to “Biography”