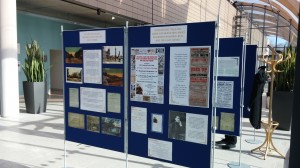 As a fellow researcher in the University of Hull’s Centre for Nineteenth-Century Studies, it was a delight to see Hull’s fascinating relationship with this significant nineteenth-century novelist and actress brought to life. Dr Janine Hatter’s hard work and knowledge of Braddon shines through in this interesting, thoughtful display, celebrating local-links whilst giving a brief overview of Braddon’s ‘sensational’ life.

On 25th February, the exhibition’s launch evening was a fitting celebration for Braddon, the display celebrating the centenary of Braddon’s death in 1915. The upwards of 40 guests were invited to first view the exhibition, with a complementary glass of wine in hand, before sitting down to hear a public lecture on Braddon, spoken by Dr Anne-Marie Beller, lecturer and Braddon specialist based at Loughborough University. Beller introduced the public to the important milestones in Braddon’s life, while additionally adding in some interesting local snippets that amused and delighted the audience. To conclude the evening, Lucy Marsden read an amusing, atmospheric passage from Braddon’s most popular work, Lady Audley’s Secret, which described the protagonist’s, Robert Audley’s, train journey to Hull and Wildernsea (Withernsea).

Probably the most discussed event of the evening, however, came in the form of a Braddon cake! After the event, guests helped themselves to a little piece of Braddon in tasty, sponge form – a perfect end to a wonderful event. Overall, the exhibition launch was a sterling success, connecting Victorian researchers with the local community and shedding new light on this understated, recently revived Victorian personality. It is a fantastic tribute to one of Victorian Britain’s most popular female writers. 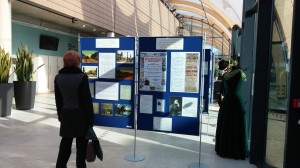 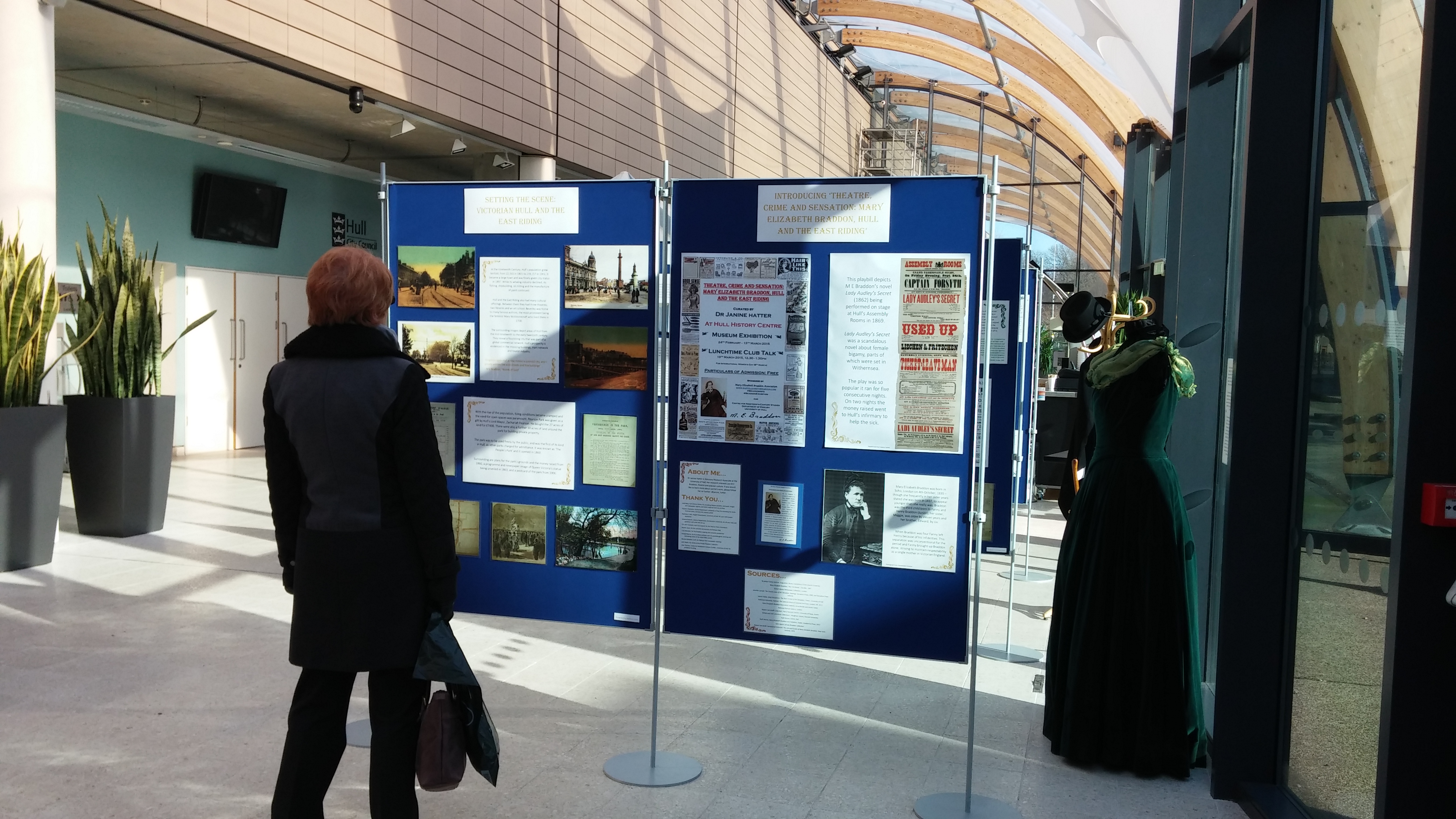 I found Dr Hatter’s exhibition at Hull History Centre to be an enlightening and eye opening look at the little known history of a very important writer. The space in which it was housed at the marvellous History Centre was large and bright, with easy access and plenty of freedom to move around the exhibition artefacts and panels. I learned a great deal from the helpful explanatory notes and references, and will be looking into some of Mrs Braddon’s acting companions in further detail. I found the social attitudes towards actresses to be quite shocking, in that they were considered to be ‘low women’ of comparative status to prostitutes or criminals. Thankfully actresses in contemporary society are now rightly celebrated and rewarded with financial remuneration equal to their male counterparts and offered the same choice and range of potential work as their male counterparts.

I also felt it was very important that Mary Braddon’s background, association and connection to Hull and the wider Yorkshire area was developed by this exhibition. Panels on her personal life, the beginnings of her career and her vast oeuvre of work highlighted the long lasting and obvious influence Yorkshire – its locations and its people – had on Braddon’s work. It is extremely interesting to see that a part of the country not often recognised by writers of the Victorian period was so influential and brought to life so vividly by Braddon.

The exhibition was incredibly with a very interesting array of well researched materials including drawings, photographs and newspaper clippings from both Braddon’s time in Yorkshire and from later times, recalling her lasting influence on the region’s literary landscape. From a personal perspective, I found the use of a nineteenth century railway map to be a particularly inspired touch – with Dr Hatter utilizing some of Braddon’s multitudinous quotes and descriptions of Yorkshire and its denizens as a vibrant and informative border to this bold visual aid. 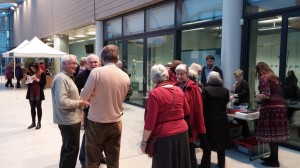 Dr Janine Hatter’s recent exhibition launch on the life and work of Mary Elizabeth Braddon was a resounding success, not only for its illumination of an unjustly forgotten author and actress, but for its celebration of similarly overlooked city and its surrounding area, namely Hull and East Yorkshire. The modern and striking Hull History Centre provided the perfect backdrop for an exhibition with the city at its heart, bridging the historical gap between Braddon’s own time and a contemporary Hull with its eyes fixed firmly on the future, a future enshrined in the much-anticipated City of Culture celebrations in 2017. Perhaps the most interesting aspect of the exhibition was its tracing of the social and cultural connections Braddon cultivated with famous figures like Bram Stoker during her lifetime. The panels were visually stimulating and laid out in a manner which was accessible and eye-catching, enticing the reader to become absorbed in the sensational narrative of Braddon’s life. As Dr Hatter’s introductory talk pointed out, however, if Braddon’s life raised a few eyebrows, this was nothing compared to the reception of her sensation fiction by her moralising Victorian peers. A lecture by Dr Anne-Marie Beller gave a succinct account of Braddon’s life and connections with East Yorkshire, and was followed by a delightful reading of a passage by Lucy Marsden from Lady Audley’s Secret, which brought the characters and the isolated area of Withernsea vividly to life. With plenty of refreshments and an impressive Braddon-themed cake to finish, this was a light-hearted and informative evening which left one wondering about the many other literary and cultural connections with Hull that might be waiting to be revealed. 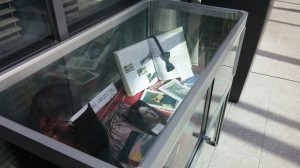 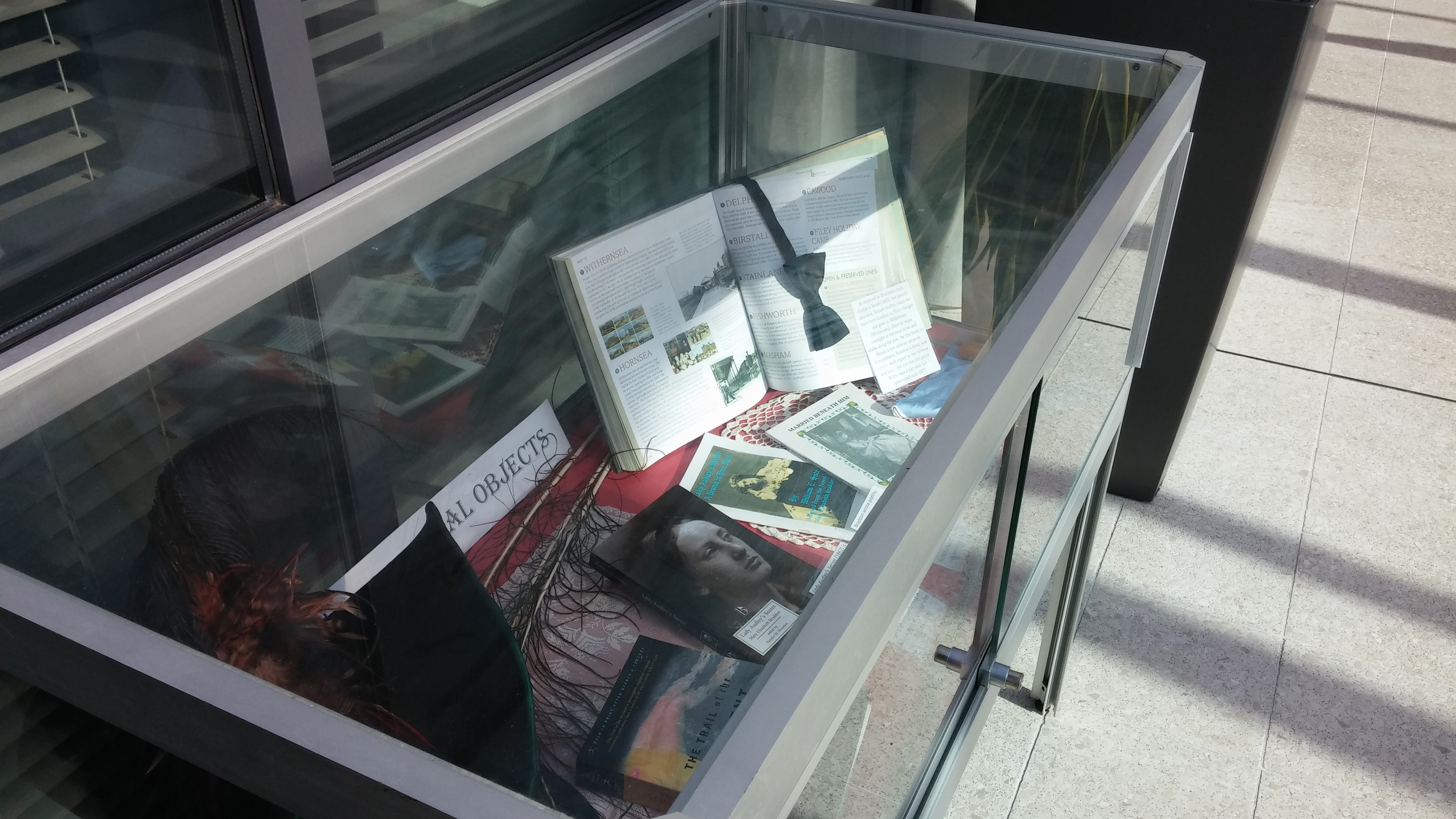 I was lucky enough to be invited to the launch event for this informative exhibition.  My prior knowledge of Mary Elizabeth Braddon was very limited so there was a great deal for me to learn and the displays have given me a picture of the many facets of this extraordinary woman.  Her courage, versatility, talent (not to mention stamina!) was quite amazing. She was no wilting Victorian miss, so it is perhaps not surprising that she created strong female characters who, when facing adversity, took their destiny into their own hands. She was clearly also aware that there may be a price to pay for their actions, especially when the social norms were flouted.

Referencing, as this exhibition did, the time Miss Braddon spent in Yorkshire and the influence its people and places had on her writing gave insights into the creative process. Her time there may have been relatively brief but seems to have been memorable.  Her concern for the welfare of the people being demonstrated by the fact that she came out of her self-imposed retirement from acting to take part in the Pearson Park benefit.

The programme of speakers for the launch event added further layers of understanding of the life and times of the author as well as including a most entertaining reading taken from perhaps her best known work Lady Audley’s Secret.  It is unfortunate that neither her work nor even her name is not better known in the 21st Century; a fact that would, I am sure, have astounded her Yorkshire contemporaries. 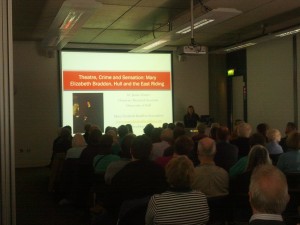 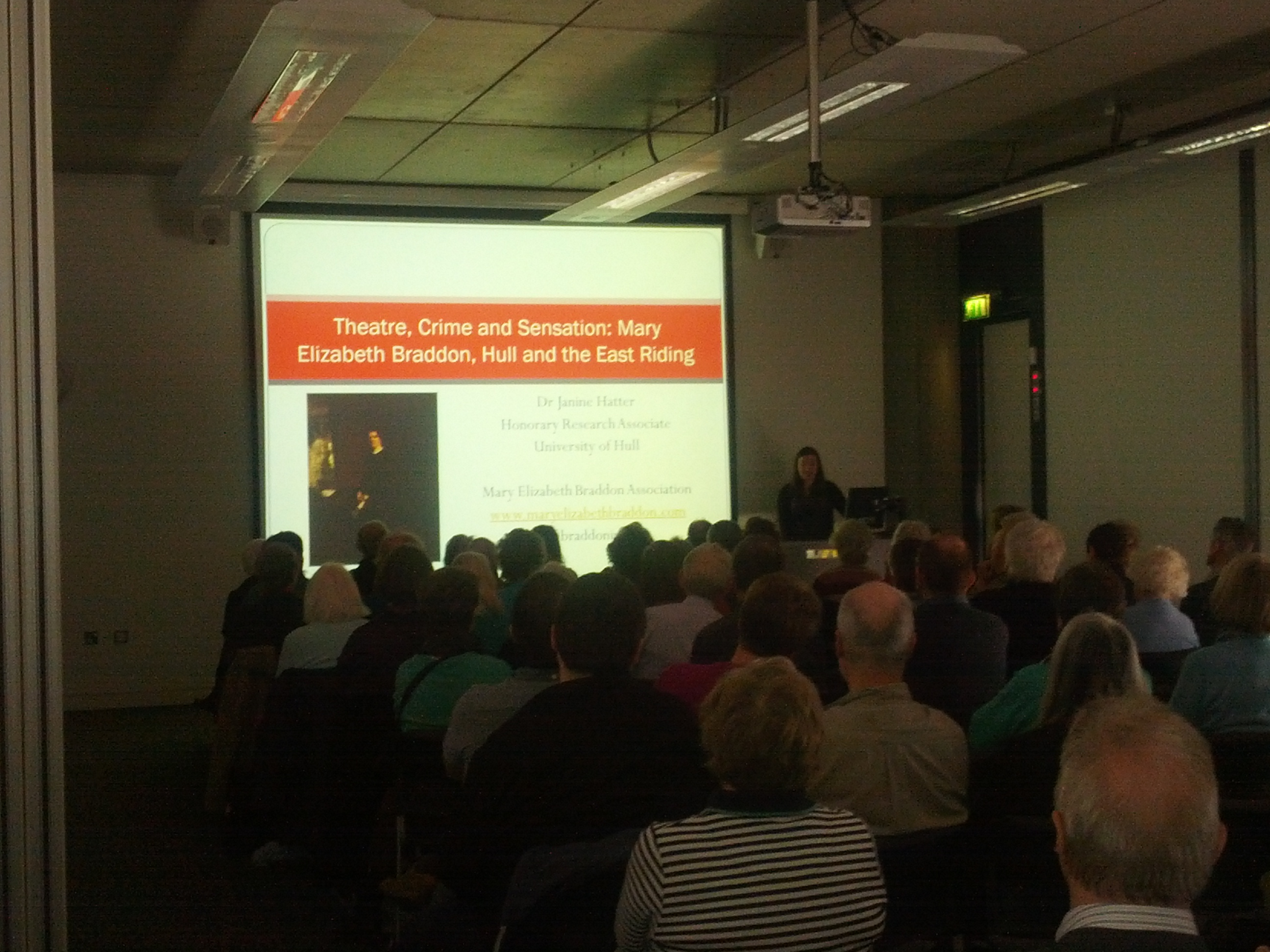 After a spectacular event launching the exhibition, and a fascinating talk by Dr Anne-Marie Beller, Dr Janine Hatter’s public lecture accompanying the exhibition had a lot to live up to. The lecture, ‘Theatre, Crime and Sensation: Mary Elizabeth Braddon, Hull and the East Riding’, sharing its title with the exhibition, drew a daunting crowd of approximately 90 people, no mean feat for a Tuesday afternoon.  It is hard to say what the people packed in to the Hull History Centre’s lecture room were expecting, but their attention was visibly held for the next three quarters of an hour. The talk was a wonderful exploration of the exhibition and expanded upon it considerably. It was delivered well and with good humour – it takes a truly gifted speaker to make Victorian literature both interesting as well as amusing.

One highlight, not covered in the exhibition, was when Dr Hatter read one of Braddon’s poems, ‘The Old Year’, aloud. The reading was as poignant as the poem itself, and made Braddon’s abandoning of poetry in favour of prose deeply questionable. Dr Hatter also did an excellent job in tailoring her subject to her audience, focusing very much on matters of local interest and Braddon’s links to the region, but also taking the time to say what made these links significant, and their importance for Braddon’s career and later success. By the end of the talk the audience had also been introduced to three examples of different types of Braddon’s literary output, the aforementioned poem, an overview of her Beverley published detective novel Three Times Dead, as well as discussing two of Braddon’s short stories. It was also nice to note that Dr Hatter promoted the Hull History Centre as an excellent facility and venue for research, stating how useful it had been and which discoveries were made there. 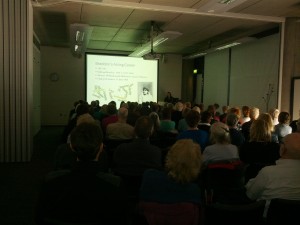 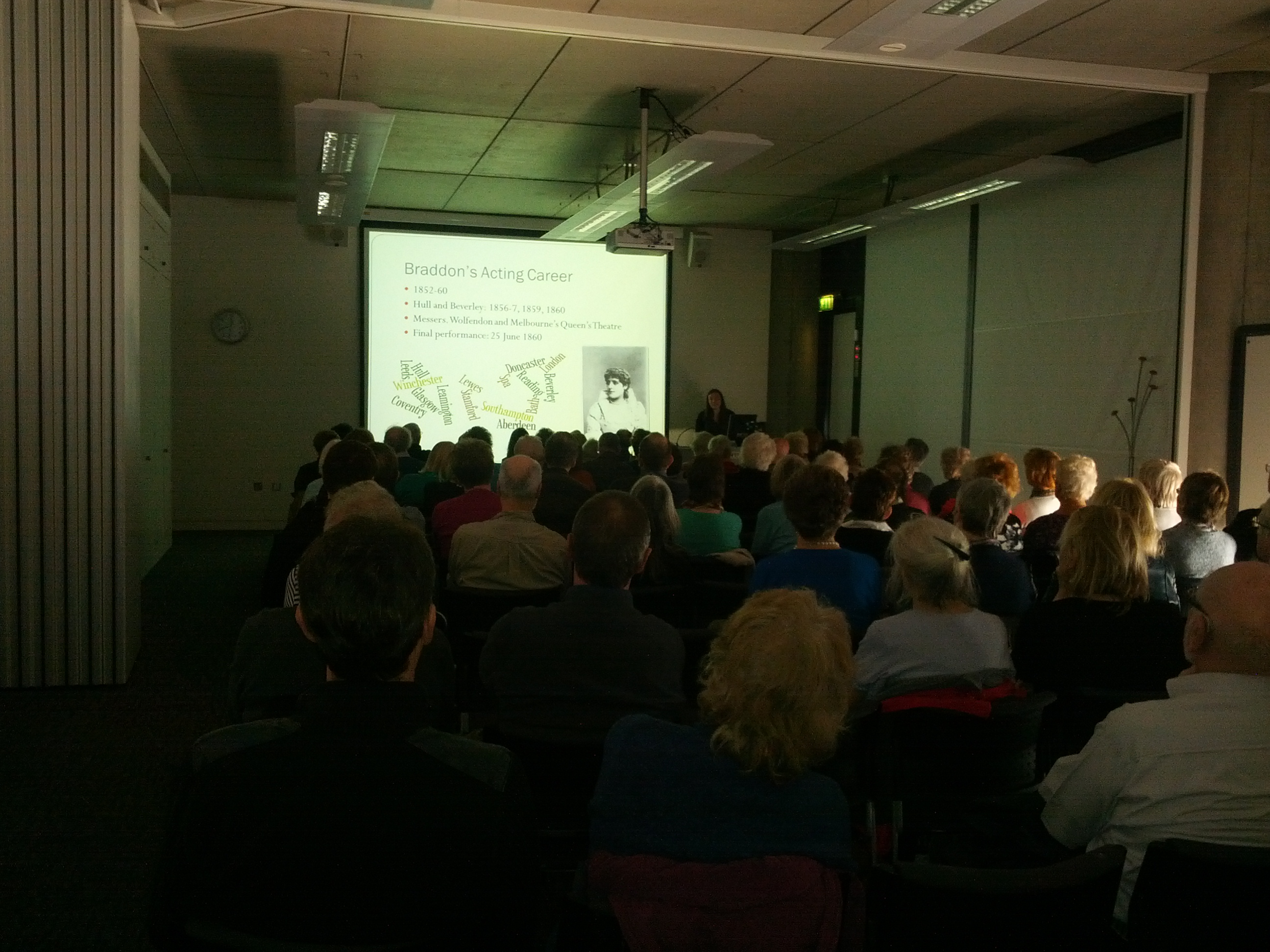 There is a monthly midday lecture at the History Centre in Hull; on 10th March 2015, the subject for the ‘Lunchtime Club’ was Mary Elizabeth Braddon. The title – “Theatre, Crime and Sensation” – promised a narrative as lively as one of Mrs. Braddon’s own novels; the room was packed, and so was the lecture: with stories, facts and allusions that were new to me and, I guess, to others in the hall.  Certainly the atmosphere was attentive and appreciative.

Dr. Hatter neatly built her lecture on the local interest, telling us that our heroine left behind a successful enough career in the theatre and worked as a governess in Beverley, in order to find the time and the space to launch her career as a writer – what a contrast to modern expectations of teachers and teaching.  Her final performance as ‘Mary Seyton’ in 1860 was a benefit performance to raise money for Pearson Park, a riveting detail for those of us who live nearby and love the Park.  The poster advertising the performance mentions the Assembly Rooms in Jarrett Street, another intriguing Hull reference: what happened to them?

Our author chose to publish as M. E. Braddon, a device as familiar now as then: think A.S. Byatt and J.K. Rowling.  She published prodigiously, often using – as Dr. Hatter illustrated with quotations in her lecture and in the exhibition – the landscape of Yorkshire and the East Riding as a suitably dramatic backdrop to her ‘sensational’ plots.  Her local characters spoke accordingly, saying, for instance, ‘I lay,’ instead of the southern, ‘I dare say.’

All sorts of parallels and comparisons flashed up as Dr. Hatter continued.  There is the obvious Brontë pattern: working as a governess and imagining stories in Yorkshire.  Then, like Mrs. Gatty and Mrs. Ewing, like Dickens, like Charlotte Yonge, Mary Braddon edited her own magazine, Belgravia. (Why were these literary magazines so popular and successful then? And is there any modern equivalent?)  Then one can’t help linking Braddon with George Eliot, defying convention by living with an inextricably married man.  As a friend says, “The more you learn about the Victorians, the less Victorian they are.” Indeed; Braddon’s mother reared her – a late third child – as a single parent, a category we think of as a modern phenomenon.

Dr. Hatter cleverly found apt and varied contemporary images for the accompanying exhibition; I wondered, as I looked, how and where she had discovered them.  There were pictures of M.E.B. at different ages and in different mode, from a striking early portrait by Frith to a stylish photo of her in a riding habit, holding a horse.  The contemporary book covers on show were entertaining invitations to the plots within; and the posters formed a public frame for life of actress and author in her context.

We all left with an intention – shown in questions to Dr. Hatter and in the buzz of ensuing chatter – of reading a Braddon novel. I myself intend to read Lost for Love for the cogent reason that the heroine shares a name with one of my daughters (Flora). I have given Aurora Floyd to a friend for the same reason… 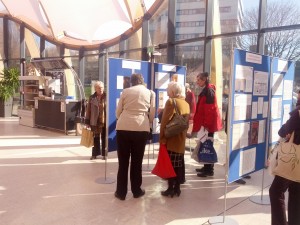 You can now read all about Braddon and the exhibition in the HDM – published Friday 13th March, 2015!