Mary Elizabeth Braddon’s Rough Justice departs strikingly from her sensational, serialized novels written earlier in the nineteenth century; however, the novel is equally relevant and intriguing because of its direct connections to sensation’s predecessor, the newspaper crime narrative, and its influential relationship to modern hard-boiled detective fiction.

Before sensation fiction became popular in the nineteenth century, the public was hungry for true-life crime and detective narratives written by the likes of Charles Dickens and Thomas Waters, among others. These narratives all followed similar conventions; first introducing the detective by describing his or her qualifying observational skills and characteristic merit. Often, as is the case of Dickens’s “A Detective Police Party,” an author adopts the detective’s own voice, and in both fictional narratives and factual newspaper accounts, no detail is neglected, painting an accurate and realistic picture of the crime scene and subsequent investigation. The influence of these conventions is easily recognised in Braddon’s Rough Justice.

However, the similarities between Rough Justice and crime narratives extend beyond structure to the content of Braddon’s novel. From December 27, 1872 to April 17, 1873, at least eighty-two articles concerning the Great Coram-Street Murder were published in newspapers included in the Nineteenth-Century Newspaper Database published by Gale. These articles describe the circumstances surrounding the murder of Harriet Buswell, also known as Clara Briton. According to “The Murder in Great Coram-Street,” published in London’s Daily News on December 27, 1872, this case promises, “all the elements of a highly exciting metropolitan tragedy in real life.” Like many of her nineteenth century sensational counterparts, Braddon draws heavily on the real-life details of this murder in Rough Justice. The articles describing the Coram-Street Murder fulfil the conventions of nineteenth century detective narratives, and the crimes in both the factual accounts and the fictional Rough Justice, published twenty-six years later, share many of the same details. These striking similarities make it impossible to deny the influence of the Coram-Street murder on Braddon’s novel. 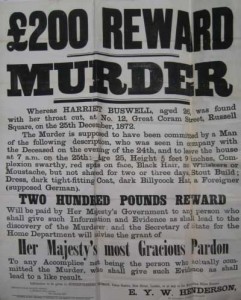 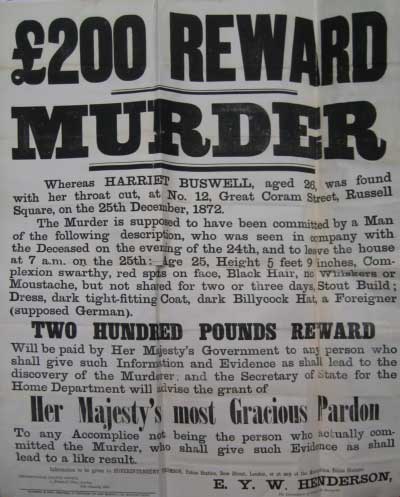 First of all, social status of the murdered woman plays an important role in the Coram-Street murder narratives. Several of the articles focus on Buswell’s impropriety. According to “The Murder in Great Coram-Street,” Buswell’s “relations are respectable, perhaps well-to-do people, and formerly she herself lived in good style ‘under the protection of a gentleman,’ but her protector going abroad she was left to her own resources, and what those were may be readily conjectured.” Furthermore, “Horriblle Murder in Great Coram-Street, London” from The Ipswich Journal is even more blunt in its unflattering description of Harriet Buswell. In this article, the victim is described as “variously represented as one of the actresses at the Alhambra, and as one of the women who frequent the Holborn and Argyll dancing rooms, and other places of amusement.” Both articles imply Buswell’s poor moral character, but “Horriblle Murder in Great Coram-Street” puts it most plainly, explaining simply that Buswell “has led an immoral life for some years past.”

Braddon invents a similar history for Lisa Rayner in Rough Justice. Like Buswell, Lisa had an older benefactor who eventually abandoned her. During the murder trial, Lisa is also described by a witness as having “been brought up a lady. . . she had never loved but two men – one who was rich and who led her wrong, and deceived her, and left her to starve; and one who was nearly as poor as she was, and was good to her” (148). Like the victim in the Coram-Street Murder, Lisa has fallen from grace and adopted a less-than-respectable lifestyle.

The depth of detail depicting the crime scene is another similarity that links Rough Justice to its real-life predecessor. In “Horriblle Murder in Great Coram-Street, London,” the author describes the victim: “The dead body of the woman was seen lying in the bed, her throat being cut deeply under the ear, severing the jugular vein, and there was another deep gash a little lower down, extending to the upper part of the left breast, life being quite extinct.” A similar description can be found in Rough Justice: Lisa’s lifeless body is a “dreadful figure on the ground, lying as it fell, the poor disfigured head half hidden by the shabby black hat; one meagre arm and wan white hand stretched along the discoloured carpet, the other doubled under the body; the worn-out boots and thin ankles exposed below the edge of a black stuff gown” (91).  Both descriptions go into gory detail to describe the condition of the body when it is found.

One of the most striking similarities between the accounts of the Great Coram-Street Murder and Lisa’s murder in Rough Justice is the significance of a fruiterer’s bag. According to “The Murder in Great Coram-Street,” on the way to Buswell’s apartment, her suspected murderer “purchased some oranges for her, which she carried home in a brown paper bag, which was found in her room, and by the aid of this bag Inspector Cruse, of the Hunter-street Police-station, has succeeded in discovering the fruterer, who remembers his last customers on Christmas-eve were two persons answering the description of the deceased and her supposed murderer.”

Conspicuously, Faunce discovers the exact same clue at the scene of Lisa’s murder: “in a corner near the door Mr. Faunce’s keen glance lighted on a crumpled brown-paper bag, which he stooped to pick up, and examined as eagerly as if he expected to find the clue to the mystery of the woman’s death in a fruiterer’s bag. . . . The bag had held grapes. There were some stalks and a grape or two at the bottom of it. The fruiterer’s name was printed on it, ‘Jakins, Covent Garden.’” (92). Almost directly citing the Coram-Street case, Faunce claims, “Crimes have been brought home to the guilty upon indications as trivial. . . . This bag was, from Faunce’s point of view, a valuable item in the sum of evidence. He even noted the way it was crumpled, as if it had been crushed in the fevered grasp of a nervous hand. He put the bag in his letter-case, and went on with his investigation” (92-93). Although in Rough Justice it is the gun, not the bag, that provides the circumstantial evidence leading Faunce closer to the murderer, the presence of the fruiterer’s bag at both crime scenes is clearly significant, and made even more so by the narrator’s comments on the importance of this seemingly inconsequential item.

Although the gruesome and specific details of the Coram-Street murder would have held a reader’s attention, “The Police and the Detection of Murder,” published by the Hampshire Telegraph and Sussex Chronicle etc. on January 11, 1873, and Rough Justice go further, asking difficult questions of the complicated essence of human nature.

“The Police and the Detection of Murder,” questions the widely accepted “crime-of-passion” motive assigned to the Coram-Street murderer by discussing the differences in the nature and motives of crimes like robbery and homicide. According to this author, “murder is a crime of so exceptional a character, both as regards its quality and the circumstances under which it is committed, that it is not amenable to the conditions which govern other crimes.” Likewise, Braddon does not shy away from these difficult questions and explores the guilty Greswold’s complicated character and motive in Rough Justice. According to Clive Emsley’s review of Black Swine in the Sewers of Hampstead: Beneath the Surface of Victorian Sensationalism by Thomas Boyle, by drawing upon “lurid and detailed newspaper reports of crime” sensation novels reveal “a subversive counter consciousness developing alongside accepted notions of Victorian respectability.” This consciousness is evident when Faunce recognizes that human nature is not simple: “could I believe that under the spotless skin of this philanthropist there beat the heart of a murderer? Well yes; after five and twenty years’ experience of human nature’s dark side I can believe in anybody’s wickedness” (241-242). Similarly, Wentworth asks himself similar questions as he wrestles with whether to expose Greswold or not: “Could love of the race be compatible with inexorable cruelty to the individual? Could any sane man persuade himself that the murder of a helpless woman, his kinswoman, who had never injured him, was to be justified by the noble uses he could make of a fortune secured by blood?” (294).  According to Emsley, “Boyle argues . . . with their fumblings towards naturalism and the exploration of the subconscious, he suggests they [sensational novels] foreshadow the work of sceptical and experimental artists and thinkers of the turn of the century.” Rough Justice bridges the gap between nineteenth and twentieth century thinking by becoming a rumination on complicated human nature. With these questions, Braddon secures her position as an influence on twentieth century American hard-boiled detective fiction, popularized almost thirty years later in the 1920s.

According to Dean DeFino’s “Lead Birds and Falling Beams,” in the early 1900s, readers looked to puzzle mysteries because they made a disorganized world “right” again, similar to the way order is restored and the guilty punished at the end of many nineteenth-century sensational novels. However, by the 1920s, readers began to lose faith in the detective as perfect savior. Americans had lived through the Great War and struggled on the verge of a great depression; in this fractured environment, the perfect, easy endings of puzzle mysteries left the public unsatisfied. People began turning toward a more realistic genre: hard-boiled detective fiction, which according to DeFino, “describes the corruption and violence that infiltrated the culture [of the 1920s] at every level . . . it made a case study of that chaos — the corruption, the degradation, the violence – and the illusions of order that grow out of it” (75). In Rough Justice, Wentworth acknowledges a similar chaos of human nature when he concludes: “These contradictions and inconsistencies are the stuff of which human nature is woven – a woof of darkness, a warp of light – black and silver threads crossing and recrossing” (295). Written in the last decade of the 1800s, Braddon’s Rough Justice embodies strikingly modern questions expounded on by twentieth-century hard-boiled detective fiction.